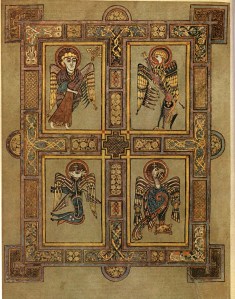 In my seminar on the Theology of the Middle Ages, I came across a beautiful poem by Adam of St. Victor (d. 1146) on the Four Evangelists that draws on the rich Christian tradition of identifying the Gospel writers with the four “living creatures” around God’s throne (Rev 4:7, drawing in turn on Ezek 1:10). It appears the first written record we have of this connection is from Irenaeus of Lyons in the second century (Adv. Haer. 3.11.8), who argued the four living creatures were “images of the dispensation of the Son of God,” which are in turn reflected in the quadriform Gospel.

In any event, here’s the poem from Adam of St Victor (trans. from R. C. Petry, Late Medieval Mysticism, 113-115), which highlights his reasons for associating each Evangelist with each living creature. Note too Adam’s connection to the four living streams flowing from Eden:

OF THE HOLY EVANGELISTS

O be joyful, faithful nation! / Seed of God’s own generation! / Mindful of the revelation / In Ezekiel’s prophecy: / In that witness John uniteth, / Who the Apocalypse inditeth: / “Witness true my pen writeth / Of what truly met mine eye!”

Round the footstool of the Godhead, / ‘Mongst the blessed saints included, / Stand four creatures there embodied, / Diverse in their form to view. / One an eagle’s semblance weareth, / One a lion’s likeness beareth, / But as a man or ox appeareth / Each one of the other two.

As Evangelists, these creatures / Figure forth, in form and features, / Those, whose doctrines’ stream, like nature’s / Rain, is on the church outpoured; / Matthew, Mark, and Luke portraying, / Him, too, who his sire obeying, / By the nets no longer staying, / Came to follow thee, O Lord!

Matthew as the man is treated, / Since ’tis he, who hath related, / How from man, by God created, / God did, as a man, descend. / Luke the ox’s semblance weareth, / Since his Gospel first declareth, / As he thence the law’s veil teareth, / Sacrifices’ aim and end.

Mark, the lion, his voice upraises, / Crying out in desert places: / “Cleanse your hearts from all sin’s traces; / For our God a way prepare!” / John, the eagle’s features having, / Earth on love’s twain pinions leaving, / Soars aloft, God’s truth perceiving / In light’s purer atmosphere.

Thus the forms of brute creation / Prophets in their revelation / Use; but in their application / All their sacred lessons bring. / Mystic meaning underlieth / Wheels that run, or wing that flieth; / One consent the first implieth, / Contemplation means the wing.

These four writers in portraying / Christ, his fourfold acts displaying, / Show Him – thou hast heard the saying – / Each of them distinctively: / Man – of woman generated; / Ox – in offering dedicated; / Lion – having death defeated; / Eagle – mounting to the sky.

These four streams, through Eden flowing, / Moisture, verdure, still bestowing, / Make the flowers and fruit there growing / In rich plenty laugh and sing: / Christ the source, these streams forth sending; / High the source, these downward trending; / That they thus a taste transcending / Of life’s fount to saints may bring.

At their stream inebriated, / Be our love’s thirst aggravated, / More completely to be sated / At a holier love’s full fount! / May the doctrine they provide us / Draw us from sin’s slough beside us, / And to things divine thus guide us, / As from earth we upward mount! Amen.

Smyrna, Georgia
View all posts by krhughes14 →
This entry was posted in Wirkungsgeschichte and tagged Gospels, Irenaeus, Middle Ages, poetry. Bookmark the permalink.