The Rise of Scripture 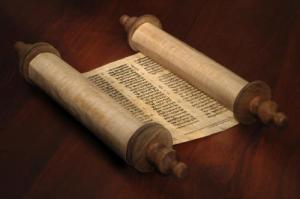 After seeing this book footnoted elsewhere for the umpteenth time, I picked up Kugel & Greer’s Early Biblical Interpretation and have found it exceedingly worthwhile. Writing the first half of the book, which focuses on early Jewish readings of the Hebrew Bible (that is, from the postexilic through rabbinic periods), James L. Kugel summarizes the various currents that shaped early biblical interpretation and some of the resulting forms of exegesis. Just to pick one interesting idea to share, Kugel has the following to say concerning the “rise of Scripture” (p. 17-19).

First, Kugel cites Jeremiah 1.9, in which Yahweh places his hand, and thus his words, on Jeremiah’s mouth, and Jeremiah 15.16: “Your words were found and I ate them, and your words became to me a joy and the delight of my heart.” Writing c. 600 BC, the prophet’s emphasis is on God’s spoken word, which he has “found” (?) and then “eaten,” thus nourishing him for his ministry. Note we have no reference here to any “written” words of God.

Second, Kugel notes how the prophet Ezekiel (writing perhaps a generation later?) echoes and transforms the language found in Jeremiah: “And when I looked, behold, a hand was stretched out to me, and behold, a scroll of a book was in it…and it had writing on the front and on the back” (Ezek 2.9-10); this scroll is given to Ezekiel to eat, who then does so (Ezek 3.1-3). Thus, writes Kugel, “in Ezekiel, God’s speech has already become a text; and the very act of eating God’s word now demands impossible ‘obedience’ and self-control, swallowing up an actual scroll.”

Kugel argues that this shift parallels the fact that “during the exile, and all the more so afterward, the divine word was increasingly a text and became the more hallowed the more the parchment yellowed and turned brown and cracked.” Further underscoring this point, he finally cites the prophet Zechariah, who wrote after the return from exile (c. 520). Perhaps echoing Ezekiel, Zechariah writes that he saw “a flying scroll” which “is the curse that goes out over the face of the whole land…I will send it forth, says the Lord of hosts, and it shall enter the house of the thief, and the house of him who swears falsely by my name; and it shall abide in his house and consume it, both timber and stones” (Zech 5.1-4). Unlike in Ezekiel, Zechariah does not eat the scroll, nor does he even touch it; instead, it only passes by. The role of the prophet has diminished; “For here is Scripture as Actor, the written word which flies like an angel to carry out God’s decrees and indeed, like the ‘angel of the Lord’ in the Pentateuch, is even able to wreak physical destruction on those who have incurred the divine wrath.”

In these closely related texts, therefore, there is an increasing significance and power ascribed to the written word of Scripture, likely coming at the expense of the independent authority of the Hebrew prophet. From a Christian perspective, though, I wonder how much farther we could extend this trajectory: for in Jesus, the early Christians believed, the written word had been fulfilled and, perhaps, even incarnated as the God-Man, the Word and Wisdom of God (cf. Ignatius, Phil. 8.2).

1 Response to The Rise of Scripture