Augustine on Literal and Figurative Interpretation (2) 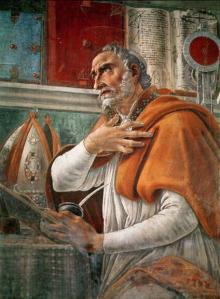 As we saw previously, Augustine’s general rule of interpretation centers on the notion of charity: if the literal level seems to lead away from the love of God and love of neighbor, an allegorical meaning must be sought. In practice, however, this is something of a difficult matter.

To take just one problem: what should we do with passages in the OT that appear to commend certain behaviors that, in light of further revelation, may now be considered immoral (for instance, the patriarchs’ polygamy). In light of what Augustine has said thus far, we might be tempted to take the patriarchs’ polygamy figuratively, but Augustine, out of a desire to preserve the essential narrative of salvation history, understands this literally, but to be only acceptable in the patriarchs’ day “because of the times” (3.18.26). Augustine at this point seems more interested in giving a lengthy digression related to his view on sexual continence in marriage (thankfully, the patriarchs did not suffer “that domination of the libido” even having multiple wives; cf. 3.20.29), but he does offer the following general statement on how salvation history shapes interpretation (3.22.32):

Therefore, although all or almost all deeds which are contained in the Old Testament are to be taken figuratively as well as literally, nevertheless the reader may take as literal those performed by people who are praised, even though they would be abhorrent to the custom of the good who follow the divine precepts after the advent of the Lord. He should refer the figure to the understanding, but should not transfer the deed itself to his own mores. Many things were done in the course of duty in those times which now cannot be done without libidinousness.

In other words, some things that were allowed prior to the advent of Christ are subsequently condemned. Nevertheless, if these actions or behaviors were not condemned under that dispensation, they should be taken literally, but are not to be applied among believers today.

To take just one more problem: what limits are there, in Augustine’s mind, on figural interpretation? On the one hand, Augustine seeks to interpret Scripture with Scripture, such that “in those places where things are used openly we may learn how to interpret them when they appear in obscure places” (3.26.37; cf. 3.28.39); nevertheless, the same image or metaphor is not necessarily used consistently across the Scriptures, and thus careful attention to context is necessary. For Augustine, though, pinning down a single textual referent is not of great importance, so long as the interpretation contributes to charity (3.27.38):

When, however, from a single passage in the Scripture not one but two or more meanings are elicited, even if what he who wrote the passage intended remains hidden, there is no danger if any of the meanings may be seen to be congruous with the truth taught in the passages of the Holy Scriptures.

Authorial intent, then, is subordinated to the notion of the Spirit standing behind all Scripture, who uses these human words to lead the reader into that truth which leads to love of God and love of neighbor.

Augustine concludes his discussion of his method of biblical interpretation with a summary and an exposition of the Rules of Tyconius, a Donatist who put forth seven rules which would unlock the meaning of the Old Testament. These Rules are conveniently summarized at the Sacra Pagina blog (here).

Smyrna, Georgia
View all posts by krhughes14 →
This entry was posted in Patristic Exegesis and tagged Augustine, figurative, hermeneutics, literal, On Christian Doctrine. Bookmark the permalink.