Paul would have made a poor evangelical. As it is commonly described, the early church was divided between those who interpreted the Bible literally and those who interpreted it allegorically. In their day, and even more in ours (poor Augustine gets routinely thrashed for his interpretation of the Good Samaritan in most conservative circles), the allegorists have suffered a fair amount of abuse. But what has always made me uncomfortable is that Paul himself used allegory: Gal 4.20-31 is a clear enough example of that. What do we do with this? A (relatively) new book promises to shed light on this issue. 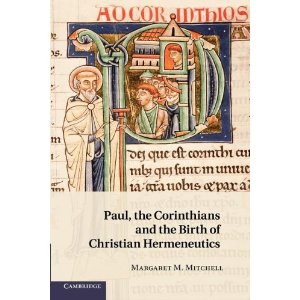 When Ben Witherington described Margaret Mitchell’s new book Paul, the Corinthians, and the Birth of Christian Hermeneutics (Cambridge: CUP, 2010) as a “gold mine” and perhaps even a “vital visionary text,” I knew this was something that I wanted to read and read carefully. And given my interest in early Christian hermeneutics, this book quickly found its way to the top of my reading pile. Though its six chapters (corresponding to a series of lectures Mitchell gave at Oxford in 2008) amount to only 115 pages, there is indeed more gold to be extracted from this book than almost every book I was required to read for Seminary. This is the first of a series of posts in which I walk through the argument of the book and evaluate or highlight points of particular interest.

Mitchell represents a growing movement in patristic studies to tear down the dividing wall, the hostility, between the two camps of interpretation. As is increasingly recognized, many Fathers utilized both methods at different times. But did they merely switch from one to the other in a purely arbitrary fashion? Mitchell’s thesis in this book is that early Christian exegesis was primarily in the service of “utility to the purpose at hand, however contextually defined” (x). And not only this, but this utilitarian hermeneutic began with Paul himself, specifically in his letters to the Corinthians.

Chapter 1 lays the groundwork for the book as a whole. Mitchell begins by quoting and analyzing Gregory of Nyssa’s prologue to his Commentary on the Song of Songs, in which she argues that Gregory sought the “useful” reading above all, whether that was found in the literal or the figurative reading, and defended this with reference to Paul (Gal 4.24; 1 Cor 9.9; 10.11; 13.12; 2 Cor 3.6; 3.16). Thus, as Mitchell observes, Gregory’s defense of allegory comes primarily from Paul’s Corinthian correspondence. Mitchell spends much of the rest of the chapter arguing her point that the Corinthian letters represent the example par excellence of Paul’s hermeneutical method. 1 and 2 Corinthians, of course, allude to other, non-extant Pauline writings to the church at Corinth, but further negotiation of Paul’s meaning can be seen if 2 Corinthians itself is broken into its composite sources (a position I slightly favor, but who can say for sure?). Here’s Mitchell’s conclusion:

“Back and forth over these six (surviving) letters, in the course of his sometimes tortured correspondence with the Corinthians, Paul negotiated and renegotiated the meanings of his prior utterances. As he did so, Paul was, as it turns out, not only honing arguments for later use in Galatians and Romans and beyond, but was in effect fashioning the building blocks of Christian hermeneutics” (8).

Mitchell identifies two areas of Pauline interpretation. First, there is Paul the interpreter of Israel’s Scriptures, in which Paul “interprets or invokes scripture that were to provide both exegetical terminology and exegetical precedent for early Christian interpretation” of both Testaments (9). Second, there is Paul the interpreter of his own correspondence, defending his writings from misunderstanding, misinterpretation, or abuse. This latter point is Mitchell’s real concern, as it is here that we can see how misunderstanding of Paul’s writings led to Paul’s efforts to clarify his meaning; “the process of writing, reading, rewriting, renegotiating words and reality unfold before our very eyes” (10). Mitchell’s contention is that these efforts required both literal and allegorical interpretation, and that (following rhetorical conventions of the day) Paul selected the interpretation that best advanced his argument. Mitchell calls this the “agonistic [from the Greek ἀγών, “competition, contest”] paradigm of interpretation” in which “texts are treated as witnesses for or against one’s own case, and employed as witnesses” (16). This agonistic paradigm is the thesis which will be unpacked in the following chapters.

One interesting aside: Mitchell references a fourth-century work by “Adamantius” called “Concerning Right Faith in God,” and remarks that she is not aware of any English translation. This is mostly true: while the Greek περι της εις θεον ορθης πιστεως is untranslated in English, Robert A. Pretty has translated Rufinus’ Latin version of the text into English. In any event, it shows how much translating work still needs to be done concerning the ante-Nicene writers!

Smyrna, Georgia
View all posts by krhughes14 →
This entry was posted in Paul and tagged Corinthians, Gregory of Nyssa, hermeneutics, Margaret Mitchell, Paul. Bookmark the permalink.