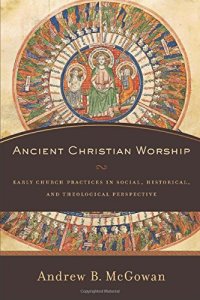 Andrew McGowan’s newest book is an exemplary guide to the ritual life of the earliest Christians. Indeed, insofar as the study of early Christianity tends to focus more on ideas than practices, this book is a particularly welcome contribution which might be profitably used in many a class on early church history.

McGowan begins with a helpful introduction which takes up the problems inherent in our understanding(s) of the term “worship.” In this book, “worship” refers not to an attitude of the heart or a particular set of music at the beginning of a church service, but rather “these practices that constitute Christian communal and ritual life, as reflected in the NT itself and thereafter” (7). As such, the book traces the development and significance of aspects of early Christian worship including obvious candidates such as the Eucharist and baptism as well as less obvious things like song and dance.

The book excels in presenting each aspect of ritual life in a clear and compelling manner. To take just one example, the chapter on “Meal: Banquet and Eucharist” does a very nice job of situating the Eucharist within the context of the Greco-Roman banquet, summarizing the key contributions of more scholarly works such as Dennis E. Smith’s From Symposium to Eucharist and Katherine M. D. Dunbabin’s The Roman Banquet. This ability to concisely pull together the main points of recent scholarship makes this book an ideal choice for introducing students to some of the key literature for each aspect of early Christian ritual. Returning to the focus of this chapter, McGowan deals with the well-known issues of reconciling the Last Supper traditions as found in the Markan and Pauline (1 Corinthians) texts, and traces the major lines of development between these early forms of the Eucharist (that is, within the context of a larger community meal) to its detached placement as a sacrament within a church service. Again, it is easy to imagine portions of the book to be used as required supplemental reading for any number of college or seminary courses.

All of this may of course be found in other treatments of the development of the Eucharist, but McGowan manages to surprise by looking at these subjects from new angles. Thus, for instance, he concludes the chapter on the Eucharist with a look at “kissing.” McGowan examines the “holy kiss,” the devotional kisses given to saints and martyrs, kisses in the context of baptism, and, finally, kissing at the Eucharist itself. By focusing on topics of this nature, McGowan helps us to see early Christian ritual as both more familiar and more strange than we originally anticipated.

In sum, at a time when some Christians are rediscovering the power of ritual (see, e.g., James K. A. Smith’s Desiring the Kingdom on the importance of habit-forming practices as central to the Christian pedagogical task), McGowan’s book is an excellent introduction to the complexity and wonder of the communal life of the first centuries of Christians. Highly recommended.

Disclosure: I received this book free from Baker Academic for review purposes. The opinions I have expressed are my own, and I was not required to write a positive review.

Smyrna, Georgia
View all posts by krhughes14 →
This entry was posted in Uncategorized. Bookmark the permalink.